The Elderly, Driving and the Law

Elderly drivers can be affected by poor eyesight, chronic disease and medication that might impair driving. States won't revoke a driver's license based simply on a driver's age. However, some states put restrictions on license renewals for elderly drivers. Many have accelerated renewal periods for people over a certain age. For example, Arizona requires everyone age 65 and older to renew their license every five years as opposed to every 12 years for people under 65. Illinois has a four-year renewal period, but the period shortens to two years if the driver is between the ages of 81 and 86. If the driver is age 87 or older, the period shortens even more to just 1 year for renewals. 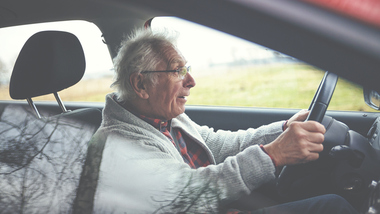 Some states require elderly drivers to take a vision test when renewing a license; some monitor older drivers by not allowing drivers over a certain age to renew their licenses by mail. Illinois requires a road test if the driver is 75 or older. Massachusetts requires drivers older than age 75 to renew licenses in person and pass a vision screening test or submit medical documentation about their vision. Renewals are needed every five years. Some states ask for license renewals every eight years, and in New Mexico, it's every year if you're older than 75. Seven states ask for two-year renewals for older drivers, beginning at age 65 in Connecticut and 85 in Texas and Indiana. All state departments of motor vehicles, highway safety or transportation have an office where a family member or doctor can make a referral about an unsafe driver. The state office will investigate the claim and the driver may have to take a road test. In California, doctors must report patients with dementia or epilepsy. Note that state rules are always changing, so be sure to check your state's relevant agency for the latest rules and requirements. Relinquishing a driver's license in old age is not an easy affair — family members don't enjoy the task of confronting a father or mother with a strong plea to take away their keys to the automobile. But aging can reduce the faculties needed to drive. And then there's cognitive decline, and decreased vision, hearing and motor skills — all can have a disastrous effect on reaction time and coordination. Greater physical, visual or cognitive impairment in the elderly is associated with increased risk of involvement in a crash. Elderly people often use medications that can interfere with driving and be particularly risky in older patients. The number of fatal crashes for each mile driven increases noticeably starting at age 70 to 74 and is highest for drivers 85 and older. These elevated crash risks are due largely to older drivers' susceptibility to injury, particularly chest injuries and medical complications, rather than an increased tendency to get into crashes. In-person renewals and vision tests have been shown to reduce deaths among older drivers. Statistical analysis of data from 46 states revealed that they have reduced fatal crash rates involving drivers age 85 and older by 31%. The bottom line is that many elderly people will face a day when they can no longer drive. They will need to consider other transportation alternatives or possibly a move to an area where they have more options.